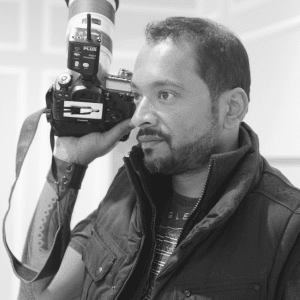 Destined to be in visual arts, the journey for Andre began with stock photography agencies like Getty Images and Alamy. Within months Andre’s images were available all over the world. Andre came equipped with experience across genres and over 50,000 frames to his credit. This rich experience has allowed him to establish himself as a leading fashion, lifestyle and food photographer in the region shooting for fashion magazines such as Harpers Bazaar, Esquire, B Journal and Marie Claire. In Kuwait he shoots for brands like Cartier, Oscar De La Renta, Tom Ford, Dunhill, Gucci, Rosenberg & Lenhart, Ann Demeulemeester, Yves Saint Laurent, Luminor Panerai, Piaget, Elizabeth and James, Christian Louboutin, Miu Miu, Armand Nicolet, Roger Dubuis, Roberto Cavalli, Matthew Williamson, Balmain, TRIWA, Azimuth, J Mendel, Giambattista Valli, Jaeger-Lecoultre and many more. With over 12 years of commercial photography Andre first had his roots in art direction and graphic arts. His days, weeks and months revolved around hundreds of thousands of commercial images but one thing nagged at him, most of those images weren’t exactly ‘right’. There were nuances that could have been included, feelings that could have been infused, and juxtapositions that could have been made. With too much of ‘should have’ and ‘could have’, there was no choice but to pick up the camera and produce an image that was just ‘right’! And that’s exactly what Andre did! He has gone on to produce images that are complete visual representations of the client’s thoughts!